Navsari is a fast emerging town in the southern part of the state of Gujarat. It is located on the banks of the Purna River and is the district head quarters of the Navsari district. It is also known as the twin city to Surat which is 37 kilometers to its North and is a busy commercial hub of the state. The eastern part of Navsari is commercially well developed while the western part is more rural in nature as well as in terms of development. The history of Navsari dates back to 600 A.D. 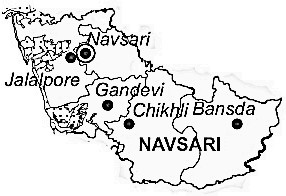 Anywhere across the state of Gujarat that you travel, you are bound to find people who are big time foodies. Same goes for the people of Navsari as well. As per the census figures of 2011, Navsari had a total population of 13, 29, 672, which was an 8.1% increase as compared to the figures of 2001. It approximately constituted 2.5% of the total population of Gujarat. While most of the places in the country showed alarming figures when it came to sex ratios, Navsari fares slightly better. As per census figures, the sex ratio of Navsari was 961 females for every 1000 males which was far better as compared to the national average of 940. The city is spread over an area of 113 Sq. Km. and has its literacy rate figures at 83.9% which is higher than the figures in 2001. The male literacy rate stands at 89% while the female literacy rate stands at 79%. The major language spoken by majority of the people here is Gujarati, while some of them speak Hindi and English as well.

Navsari has only one river that flows through the city and that is the Purna River. Over 170 kilometers long, it runs parallel to the Tapti River. It flows through a salt water belt and is known by other names like Payoshni and Paisani. It meets the Gulf of Khambat near Navsari. The river is visible on the journey through Navsari by rail as well as road. Apart from the Purna River the other two water bodies that are famous in Navsari are the Dudhiya Talav (Lake) and the Sharbatiya Talav.

Due to its proximity to vasious water bodies, the climate of Navsari is mostly on the humid side. However, there is a cool breeze that sets in after dusk which makes the climate pleasant. Navsari has three major seasons which are the summers, winters and monsoon. The ideal time to visit Navsari is from the months of October to April.

May is the month when the summer is at its peak and temperatures may breach the 45 degree barrier. Hence people mainly do not venture out of their houses during the month of May.

June to September is the season for monsoons and the city receives close to 120 centimeters of rainfall annually. The low lying areas which are close to the sea often get flooded as the rains may get heavier at times.

November to February is the best time to visit Navsari as the climate during winters is cool and pleasant all through the day. The temperatures in winter show a sharp dip post sunset by dropping to as low as 10 degrees. People with their woolens on, especially toddlers in their winter attire are a treat to the eye.

Navsari is a town where people wear their heart on their sleeve. A trip there would certainly send you back with fond memories as well as the desire to visit again!