Frank Zappa once famously said, “If you want to get laid, go to college. If you want an education, go to a library.” It is evident from this quote the importance of a library in the life of a human being. A library is that vast ocean of knowledge which can be explored by anyone at any given time of the day and know about any particular issue that he intends to know. The city of Navsari in Gujarat also has two such oceans of knowledge. One of them is the First Dastoor Meherjirana Library. 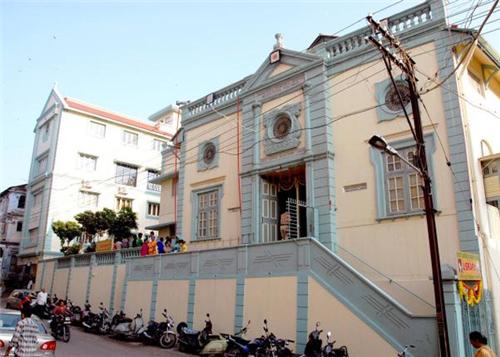 Located in the busy Tarota Bazaar area of Navsari is the First Dastoor Meherjirana Library. The historic significance of the place is evident from the fact that it has been imparting knowledge to the people of Navsari since the past 135 years since its establishment in the year 1874. The building was constructed by a wealthy Parsi gentleman from Mumbai, Navsariwala Seth Burjor Bamanji Padam on his own land at a cost of Rs. 225/- which was a large sum during that time. The construction began in the year 1872 and was completed in 1874.

The library is named after one of the most significant members of the Parsi community. Dastoor Meherji Rana was one of the most renowned priests in the Parsi community who was asked by the Mughal Empire to have an audience with the Emperor Akbar in order to explain Zoroastrianism to him. It was during his stay with the Mughal’s that he cast a deep impression in the mind of the emperor through his learning’s. Meherji Rana’s presence in Akbar’s court was a great historic incident for not only the Parsis of Navsari, but for the whole Parsi community. Appreciating this, when he returned to Navsari, all the priests accepted him as the head of the Navsari priests, and for the first time the title of high priest (Vada Dastur) was bestowed. Therefore, he became famous as the First Dastoor Meherji Rana, beginning a priestly lineage which continues to the present day. It is for this reason that the library is named after such a learned person and the pride of the community.

After the construction of the first library building in 1872, a formal trust deed was drawn up in 1874, and a committee was formed for the management of the library. From its very beginning, the Library has been cosmopolitan and has served all the communities of Navsari. As the library's collections grew, the original building was found too small, and in 1906 Jamshedji Kavasji Dastoor Meherji Rana gifted the present building, located near the Navsari Atash Behram (Fire Temple), to the library. In 1967, a famous merchant of the Kolahji family Seth Rustomji Hormusji Kolah provided the funds for annex to be built. In 1999, the entire library structure and interior were renovated with funds donated by Sir Dorabji Tata Trust to provide its patrons better amenities. In March 2008, another hall was constructed above the 1967 annex with the library's own funds. In September 2009, a new annex building was constructed from funds donated by Sir Dorabji Tata Trust wherein various modern facilities have been incorporated, including a new reading room, a conference hall, apartments for visiting scholars, and a laboratory for the preservation of the library's many rare books.

The library is comprised of two buildings – first, the original building and seconds a recently constructed annexe. The original library structure consists of a large reading room with capacity to seat about 60 persons, as well as the bookcases and the librarian's cabin. The new building contains a reading room for students, as well as a fully air-conditioned conference hall complete with a computer and digital projector for presentations, a climate controlled storage space for rare manuscripts and books, three air conditioned guest rooms for visiting scholars (see below) and a laboratory for the preservation and conservation of our old manuscripts. The library has a microfilm reader machine to facilitate the viewing of microfilms. Wireless internet access throughout the library area and photocopies are also available upon request.


Facilities in the Library

With the construction of the Sir Dorabji Tata Trust Annexe, the First Dastoor Meherjirana Library now has the facility to provide fully furnished and air-conditioned apartments for visiting scholars and guest researchers at a nominal cost. The apartments are each furnished with beds, a desk, and a locking cupboard, as well as an attached bathroom with a water heater and shower. The floor also contains a lounge area as well as a kitchenette with a stove, microwave, refrigerator, and water purifier. Wireless internet is available for visitors. Prepared meals can be arranged for visitors through a local Parsi housing colony.

The First Dastoor Meherjirana Library is home to one of the most important collections of manuscripts relating to the Zoroastrian religion in the world. The library's oldest manuscript, an Avestan manuscript written in Iran dates to the year 693 AY/1323 AD. In addition to housing rare manuscripts, the library also functions as a lending library to the local Navsari community. Books of a more general interest include books on philosophy, psychology, astronomy, medicine & anatomy, astrology, etc. The library has extensive collections of classic and contemporary fiction in English, Gujarati and Hindi. The library caters to school and college going students by providing them access to encyclopedias, dictionaries, publications of academic interest, and internet facilities for research. The library also
subscribes to a number of newspapers and magazines for the general reading public.

Miss Katy. K. Antia is the current chairperson of the managing committee of the library and the current librarian is Smt. Bharti K. Gandhi, who has been in charge of the place since 1984. Entry fee to the library is INR 25 and you can also become a lifetime member of the place by making a onetime payment of INR 2500.

So come, be a part of history and also have a swim in this vast ocean of knowledge!

Explore more about Public Utility and Services in Navsari