There are instances where one aspect gets known as the cultural identity of a particular place. However, there are also certain places which are an amalgamation of various cultures and yet thrive on peace and harmony. The city of Navsari in the state of Gujarat is a prime example of the amalgamation of cultures from across the country and yet be at its peaceful best. 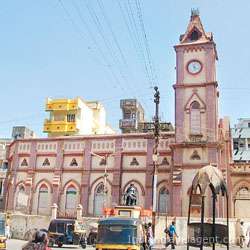 The city of Navsari in the state of Gujarat is the district headquarters of the Navsari district. It is also known as the twin city to the commercial capital of the state, Surat. It is located 37 kilometers south of Surat and is situated on the banks of the Purna River which empties into the Gulf of Khambat. The city has its origin back in the 14th century where the first rulers were the Chalukyas followed by the Parsis, Muslims and then the British. There are many theories regarding the name ‘Navsari’ being given to the city.

Shayashray Shiladitya, who ruled over Navsari in the seventh century named this city NAG VARDHANA in honor of his Guru Nag Vardhana. During the same period, the name changed to NAV SARIKA as is evidenced by a recovered copper plate dated 669 A.D. The legend is that Shayashray Shiladttya presented a copper plate to a priest in his town. The copper plate read that Shiladitya, the ruler of "Nav Sarika," had bestowed a nearby village upon this priest of the Kashyapclan.

Another legend is related to the Parsi community which arrived in Navsari in the year 1142 A.D. the legend says that when they first came to Navsari, the place was named as Nag Mandal. However, they found the atmosphere and surroundings of the new place similar to the ‘Sari’ region of their homeland Iran. Since ‘Nao’ meant new and the atmosphere was similar to the ‘Sari’ region, they named the place as Navsari. The reign of the Parsis ended as the Muslim rulers took over. For the last one hundred years, until India's independence in 1947, Navsari was the property of the Gaekwads of Baroda.

The climate of Navsari is predominantly humid considering its proximity to the sea. Although it is extremely hot during summers where temperature breaches past the 40 degree barrier, it is equally cold during the winters. The temperature during winters ranges from 12 to 18 degrees. The best time to visit Navsari is between the periods of October to March.

You surely need an expert, who is well versed with the city to guide you through the criss cross lanes of Navsari. You may very well call it the ‘City of Gallis’ (Gali is the Hindi word for bylanes) since there are enormous number of such bylanes and a person new to the place will surely not be able to figure out his destination if he has to pass through them. There are autorickshaw facilities in Navsari which have a fixed rate for every particular destination that you want to visit. There are also buses run by the state Transport Department.

If you are a fan of the Gujarati cuisine, this is a must visit place for you. The enchanting flavours of Jalebis, Dhokla, Khaman, Patra and other such items would even make you eat up your fingers. The popularity of the Navsari Khaman is evident from the fact the one of the most iconic shops in the city ‘Sabras’ which opens at 8 in the morning, the items are sold out by the time the clock strikes 9. There are other popular restaurants in Navsari as well which include City Corner, Ramanand, Shagun as well as popular pizza outlets like US Pizza and Domino’s. The roadside food in Navsari is also extremely popular with many stalls dotting the landscape of Lunsikui, a posh locality of the city.

The Mota Bazaar area of Navsari is the city’s iconic shopping destination. Shopping of any kind can be done from here ranging from household items to clothing to gifts and every other shopping accessory can be purchased from this area. The Textile Market is also a popular shopping attraction in Navsari.

Places to Visit in Navsari

Apart from the innumerable Mango, Chickoo and Sugarcane fields that decorate the outskirts of Navsari there are many iconic places that can be visited here. One of the most visited places is the Dandi beach which is the end point of the Dandi March which was undertaken by the father of the nation, Mahatma Gandhi. The beach is 18 kilometers away from the main city and can be easily accessed by roads. Another important place with relevance to Mahatma Gandhi is the point from where he was arrested while boarding the Frontier Mail in 1930. That spot has now been converted into a quaint little railway station in memory of the great man and has been named as ‘Gandhi Smriti.’ There are also places of religious significance in Navsari that can be visited. The Sai Baba Temple situated on the outskirt of the city and adjacent to the National highway (NH – 8) is a place which attracts large number of footfalls on Thursday’s as well as all through the week. The other places that can be visited here is the Lunsikui Gardens, as well as the Parsi Fire Temple.

A visit to Navsari is surely going to get your monies worth and you will also have the best food you ever had! So, aye halo!